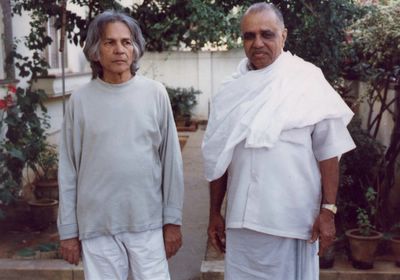 Brahmachari Sivarama Sarma was once a professor of Chemical Engineering at the Indian Institute of Science, Bangalore, India. He joined the Indian Administrative Service in the Nehru administration as Chief Engineer in the Sindhri Fertilizer Factory and resigned the job when Nehru pressured him to go to Russia. He then dedicated himself to spiritual pursuits under the guidance of the Sankaracharya of Kudli Math in Karnataka, who subsequently chose him as his successor. But factional intrigue prevented him from accession to the seat (pitha= "seat" of religious authority).

The Naiyayikas (followers of one of the six orthodox systems of Indian Philosophy which specializes in logic and theory of knowledge) have declared that knowledge of the sixteen fundamental categories propounded by them would lead one to moksha. The scientists have vouchsafed that the knowledge of nature and the discovery of its mysteries will lead one to final and total happiness.

Both the claims have been negated by an 'experience' which is intellectual and conceptual and is pushing mankind toward total annihilation. Here comes a man called U.G. who knows something of our Shastras but condemns them outright.

Who is this U.G.? What does he stand for? What are the principles of his teaching? What are his ideas? What is the meaning of his roaming around the world twice a year spending thousands of dollars on air travels and moving from continent to continent like a migratory bird?

In spite of my contact with U.G. for two decades, I am unable to make out exactly what he stands for. I am unable to place him either as a 'sage' or as a 'saint', much less a social reformer.

U.G. doesn't give public lectures, nor does he belong to any institution. But people go to see him wherever he is and flock around him discussing all sorts of things 'from disease to divinity' (as he himself would put it), including sex, morality, politics, and corruption.

He shuns religious persons, ridicules social reformers, condemns saints, speaks with disgust about sadhakas (spiritual aspirants), detests the chanting of the Vedas or the recitation of the Upanishads, and is full of rage when one speaks of Shankara or Buddha. He becomes furious of the very mention of Sai Baba or Rajneesh. The height of his rage could only be seen when 'J. Krishnamurti freaks' approach him.

He doesn't give any solution to any of the problems raised and avoids questions on 'enlightenment'. Whenever he gets entangled in a controversy he says, "It is so. Take it or leave it." Whenever he is confronted with arguments he becomes violent and says, "Who asked you to come here? You may get up and go. That's fine with me."

U.G. is a good conversationalist. He can speak confidently on any topic, be it economics, politics, history, or geography. He gives the impression of being a jack of all trades. He has studied a bit of Vedanta and is quite an expert in misquoting the passages from the Upanishads to suit his argument. When he is questioned about the authenticity of his statements he lashes out saying, "What I say has an authority of its own." Isn't it an egotistic attitude to make such claims, as if he is a sage or God?

He is against morality, but refrains from preaching immorality. He gets wild when somebody speaks of honesty, though he is not dishonest himself. He is a bundle of contradictions. He statements are devastating. His ideas are shocking. His expressions are bewildering. His utterances are irritating.

Yet, I am pulled toward such a person! Is it my weakness? No. Or is it because of my passivity or cowardice, or incapacity to stand on my own? No. Not at all. Then what? I don't know! I don't give a tuppence for what he says on matters religious, much less his teaching. Yet, there is something in him that drags me to him.

He is like a machine gun shooting anything that moves in its vicinity. We only seem to be supplying the bullets.

What a tragic situation! Is this 'hero worship' on my part? Am I idolizing? No. Certainly not. Am I then foolish or stupid? Am I such a gullible fellow, a fainthearted chicken? Is it the pusillanimity in me? Oh, man! Answer your conscience, if you have any left of your own. What avail is all your holy associations, your japa (worship) and the like, if you still hang around him in spite of your distaste toward his way of life and teaching?

Yes. These are the questions I often posed to myself. I found no answers. I made up my mind not to think about him any more; nor bother to visit him. And yet, the moment he is anywhere near Bangalore my nerves reverberate! I become restless and find no peace till I run to him. Why? Why? Why?

There is yet another aspect of U.G.'s life, a totally different side of this man. He is very simple and behaves like a child. He acts meticulously and doesn't make a mess of things. Whenever a new visitor comes he receives him with all kindness and courtesies. When people are in difficulties, he helps them to come out of their troubles. Yet he says he has no 'bleeding heart'.

He is at his best when he explains the chemical changes that have taken place in his body.

What have I gained in my twenty years of association with him? As a result of my contact with him my attachment to gurus and sannyasins has faded away. I have lost all my interest in visiting temples and sannyasins. Havanas and homas which I was regularly performing have dropped away. I felt and still feel that dropping them, however, is not the be-all and end-all of existence.

Is it possible to reject totally whatever he is saying and go your own way? Impossible. At the same time, is it possible to swallow all that gibberish that he throws at you? That is out of the question. That is my predicament!

But then when someone asks, "Who is this U.G. whom you are talking about?" what answer can I give? Is he an enigma? Yes. It is impossible to gauge him. The gurus and godmen we have in our midst today are no match to him. He is unique in every way. He is an undaunted spirit. He is a daring and fearless person.

Hearing him is one thing and being with him is altogether different. Meet him. Listen to him and you will yourself know what I am talking about. Don't bother about what he says. Don't try to know "that which is beyond words." If you attempt to do so, you may "land up in the loony bin singing loony tunes and merry melodies," to use his own expression. Or to put it also in his own words: "You may have to go and hang yourself on the tallest tree with the longest rope."

This much is certain. You will not be the same after meeting him. You will start questioning your own actions—their validity and their usefulness. This is the help that he renders. He puts you on your path in a subliminal way and removes the cloak which you put on, trying to be what you are not. That's the sort of help you get from him.