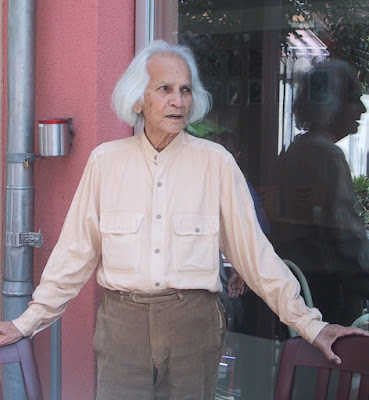 U.G.: Neither Knowledge Nor Wisdom
There Is Nobody There
Dr. Jean-Michel Terdjman

What U.G. is telling us is not contradictory, incoherent or illogical. It may seem so because we don't know how to take it. We don't know how to take it because what has been called his "teaching" is no teaching at all. U.G. is always enunciating mere statements of fact, in their rawest possible form. He does not provide us with the context, the perspective necessary to see how they fit. The reason this is so is not that he is trying to wake us up from our stupor (in my opinion, he has no agenda whatsoever), but simply that he has no reason of his own to do so. What he says is absolutely true, yet, at the same time, is an expression of history (he says it in English and not in Chinese, and he speaks English with a foreign accent) and of his personality (he is lazy, and full of energy and aggressive inclinations, very gentle with the heart of a butcher, and an anti-Semite to boot—not out of conviction, of course: just to remind his Jewish friends how illusory their self-identification is). In other words, U.G. is not a creature from outer space: his actions and his utterances, like ours, are expressions of total conditioning. Like us, he is an event in nature.

* * *
Does U.G. bring us anything of value? He says himself that he cannot help us, and that there is nothing to do in any case. Yet, most people like his presence, and keep going to see him. They ask him questions, and keep listening to his pseudo-answers. We don't learn anything "positive" from him (in the sense of "positive knowledge"), and yet we keep coming back for more of the same.

U.G. does not teach us anything. He is not noticeably wiser or more knowledgeable than anybody who might have applied himself to the pursuit of knowledge and wisdom, and who might have been reasonably successful at it. His knowledge of the world is derived from weekly magazines. He is not averse to repeating their clichés, as well as any preconceived idea, accepted value or unexamined opinion that is lying around and that strikes his fancy or stimulates his esprit de contradiction. Anybody who has been around him for a while knows that he can be either gentle or quite mean, indulgent or harshly critical. It would be tempting to find a hidden agenda, a grand design in all his idiosyncrasies. But he himself denies it. There does not seem to be any reason to doubt his statement. The most reasonable conclusion is to accept the fact that he is just like anybody else. His behavior, like that of any other man, is thoroughly conditioned by his origins, his upbringing, and the circumstances of his life.

So what is it that makes U.G. so special and so different? It is not what he is, but what he is not, that can give us an answer. U.G. is a mind-body unit, like the rest of us. Unlike the rest of us, there is no sense of self that goes with the mind-body unit. Unlike the rest of us, U.G. does not have a general idea of himself as an individual self, except in the most practical and mundane way. As a result, he does not have any of the grand schemes that we concoct for ourselves when we start believing (very early in our life) that we exist. His mental processes, for reasons that I (not being a brain physiologist) do not understand, are no longer functioning in the usual time-space framework.

More importantly, this individual does not know that he exists, and could not care less. Not being aware of himself, he can be aware of a lot more things around him than we usually are. When I say that he is not aware of himself, I do not mean that he does not know that a body is there, that he does not know his name, or that he is not aware that somebody is talking to him. I mean that he has no sense of himself as an I, as an entity separate from the rest of reality, with a purpose and a destiny. U.G. is his perceptions, thoughts, etc. He does not just have them. The difference between U.G. and me—or you—is that when things happen, they happen to me. For U.G., they just happen.

There is no accounting with U.G. Things come and go, they don't leave a trace in him, not because the memory is failing, but because there is nobody there to reflect upon them.

Everything is an event in nature: the cat scratching himself, the sun rising over the horizon, a supernova exploding, and my thinking about U.G., and typing my thoughts. Each one of my emotions, thoughts, desires, movements, decisions, etc., is an event in nature, and is a part of the overall chain of causes. Yet, in an amazing and very arrogant way, I decide that I am "a kingdom within a kingdom" (Spinoza). That is, I perceive myself as an independent and autonomous center of consciousness, creator of its own thoughts and decisions and cut off from the world.

There is no way to escape this illusion. Any bit of consciousness that "I have" about anything is automatically accompanied by the sense of the I. Events in nature (the sun shining in the sky, this noise there, this car passing) do not just happen: they happen to me. Ideas, emotions, desires, that "I have" do not just happen: "I have" them, "I think them." This is where U.G. is different from the rest of us: the "software" of the general idea of the self has been erased in him. "He" does not exist. Only the mind-body unit labeled U.G. exists.

U.G. is there as a personality (a conditioned mind-body unit), not as a person. A non-person is a natural event which has no agenda. He is not specialized in any particular field—or, if he is, does not care to show it—and therefore cannot teach us anything. That does not mean that he talks in vain, or that we listen in vain: having somebody constantly reminding us of the bare-bone facts cannot be that bad. But it would be nonsense to expect anything concrete from U.G.: neither knowledge (knowledge is irrelevant to what we want) nor liberation. Liberation is what the ego wants. But U.G. cannot give it to us because we are already liberated. That is, we are already in our natural state, existing as events in nature. (Where else or how else could we exist?)

The problem is, we are already liberated, but we want to know it. We want to experience liberation. Unfortunately, the natural state in which we are cannot experience itself, or know itself. Only the sense of the I—the absolute illusion of the ego—can know itself or think itself. The ego is a byproduct of mental activity, of thought, of the act of knowing, and it wants to know itself beyond knowledge. This is like the reflection in a mirror trying to be a concrete material object in three dimensions. The quest for liberation, the desire to know liberation is, of course, doomed and self-contradictory, yet, at the same time, very pleasurable, because by so doing the ego experiences itself, thus increasing and reinforcing itself. As Spinoza says, everything in nature wants to persevere in its own being, and to reinforce it.

Is U.G. free? No more than you and I. His conditioning is as thorough as anybody's—all events in nature exist in the chain of causes. But there is nobody there to experience either the desire for liberation, or the imagined freedom that is supposed to come after the cessation of desire. U.G. is neither free nor in bondage, because he is not. How about us? Our objective existence is no different from his. Our subjective sense of the self creates the concepts of freedom and bondage. We may think equally that we are free or in bondage. Like U.G., we are neither. Just events in nature.

The above passage is excerpted from The Useless Self, a series of reflections on the illusion of the ego, published in a bilingual (French-English) edition by Les Deux Océans, 19, rue du Val-de-Grâce, 75005 Paris, France.