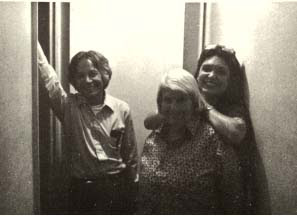 
I must state a few facts about U.G. Krishnamurti here, because it is impossible to understand my case without knowing a little bit about U.G. and the facts of his enlightenment. The only word, which aptly describes U.G., is ‘perfect' human being.

U.G. is the most perfect human being I have met in my life and in the world. There is nothing apparently extraordinary about him. It is when you spend some time with him that you see the perfection operating. I have lived and traveled with U.G. and after being with him for a substantial period of time I realized that U.G. treats human beings as human beings—as the human beings should be treated: with respect, consideration, understanding, and compassion. I also realized that he treats everybody as his equal, whether the person is younger, poorer, richer or older. We all treat people as relations—either above us or below us—we do not treat people as our equals. U.G. treats people not as relations but as human beings, and as his equals. I had never known or experienced anybody treating human beings this way. I saw and experienced U.G. treat human beings with the respect and dignity human beings deserve. U.G. also treats each person as one needs to be treated.

Every act which U.G. performs is the right act—the act which is morally right, ethically right, circumstantially right, right for the other people, and right for himself. This behavior comes naturally to U.G. He does not make deliberate effort to act this way. Nor is his behavior accompanied by the feeling that he is a special person, that his behavior is special and that he is doing people a favor by treating them with respect and dignity. This behavior is so natural and so unselfconscious that most people do not even recognize and notice that his behavior is perfect and that they are being treated in a very special way. Most people who come in contact with him do not even recognize these very special qualities about him. Not everybody can recognize perfection. To recognize perfection one has to have it’s germ in oneself.

Another most special quality of U.G. is that he never uses people for his personal gain. I have never seen him use people or take advantage of people. He does have social relationships of give and take, to be able to exist and function in the world, but he usually gives back much more than he receives. U.G.’s giving is the purest kind of giving. He gives without expecting anything back in return. He does not even expect gratitude. He gives because he feels like giving, because you deserve it, or because you need it. He gives so silently and so selflessly that often times even the receiver does not realize that he has received. Often times he gives hurting his own interest. For instance, if it is good for the person to be told something which may make the person hate him, he goes ahead and tells it at the risk of losing the person’s love, respect and friendship. If he feels it is necessary to state the bitter truth for the person’s good, he states it. He can state the bitter truth because he does not mind losing the person’s friendship if it helps the person.

U.G. does not care what the world thinks or says about him. If it is the right thing to do, he will do it. The right thing being morally, ethically and circumstantially the right thing; a thing right for others and for himself.

U.G. talks about the extraordinary ‘Energy’ he possesses and the extraordinary experience he has gone through. At the age of forty-nine he went through a physiological process which destroyed every cell in his body. At the end of this process he died clinically and was brought back to life. U.G. talks about this process of enlightenment not in spiritual terms, but in physiological terms, demystifying the whole process as much as possible. He explains that the state, which this process has brought him into, is mistakenly termed by all the religious, mystical and spiritual scriptures as the Enlightenment. He states that the energy which has brought him into this state is acausal, that there is no reason why this energy chooses to strike a certain individual.

U.G. states that this energy is like the lightning, it strikes any person without a reason. According to U.G., there is no way of inviting this energy or preparing for this energy through any meditation, prayer, discipline, spiritual or religious practices. Once this energy hits you it transforms every cell in your body transforming you completely and forever. According to U.G., such a person is an ‘offshoot mutant’ in the process of human evolution; such a person is much more evolved than the rest of the human race. U.G. demystifies the entire concept and process of enlightenment, explaining it in physiological, clinical and scientific terms.

To the people who come to see him and talk with—most of whom come wanting and seeking enlightenment—his advice is that it is not possible for anybody to get it by any means; therefore to stop wasting their lives searching for enlightenment; and to make money and lead a happy, comfortable, and well-adjusted life in the society.

Even though he is a man who is in a state called ‘Enlightenment’—which is a state associated with spiritualism—there is nothing “spiritual” about him in the sense with which the word ‘spiritual’ is associated with in the west today. Today in the west, the terms ‘spiritual and spiritualism’ conjure up images of gurus such as Rajneesh—the men with flowing robes and beard claiming to be Gods or saviors of mankind.

U.G. is a thoroughly modern, secular, educated man—a man aware of everything in today's world and a man who is able to communicate in today’s language. His state of enlightenment functions in the way he makes decisions and acts, in the way he treats situations, in the way he treats people, not in the way of placing his hand over somebody’s head and screaming, “Heal...” or materializing watches. The enlightenment is supposed to be Perfection. In U.G.’s case the perfection functions and makes it self-evident in day-to-day acts of treating people and treating situations which is what day-to-day life consists of, which is what the entire life consists of. U.G.’s perfection functions in everything he does. But not many people recognize this perfection.

U.G.’s situation is like that of an elephant and the blind men. U.G. is like the elephant and the people who come across him are the people with insufficient perception. People perceive and interpret his behavior according to their own ability. Most are unable to perceive all of him; most are able to only perceive parts of him and interpret them according to their sensibility—unfortunately most of the times incorrectly.

U.G. spends six summer months in Gstaad, Switzerland and the rest of the year traveling between Europe, India and United States. U.G. travels to be able to come in contact with as many people as possible. U.G. is aware that he is the possessor of this extraordinary Energy and he must share himself with as many people as possible, making them aware of this Energy and in the process helping whoever comes in contact with him in whatever manner he can. Though U.G. flatly denies that his motive is to help anybody—I have seen every person who comes to him in good faith benefit from his person in some way.

U.G. keeps his door open to anybody who wishes to see him any time of the day or night. He makes himself available to anybody anytime of the day and night, and answers any question they ask him about himself and the Enlightenment. Most people come to see him after hearing about him through friends; through the word of mouth. Unlike most individuals, U.G. does not have two lives and two personas—one personal and one public. U.G. is the same in private and in public, in fact he has no private life. He has nothing to hide. Whatever he is, is all there out in open for people to see all twenty-four hours of the day.

Mme. Valentine is not rich. She is much older than U.G. and a retiree. She has a small amount of her pension funds invested and she and U.G. live on this income. They lead a very simple life.

The question may arise as to why did U.G.’s Energy help me. I believe the supreme Energy helped me because I deserved it’s help; firstly because I was in a situation in which no human being or any worldly factor could have helped me. Secondly I was deserving because I was totally innocent. And the third reason is because I believed in this supreme Energy. I had heard about this Energy from J. Krishnamurti, I had read about it in our Indian scriptures, and I had heard about it from U.G. I had no proof that the people who claimed that they possessed this Energy really did possess, but I had genuinely believed in the ‘possibility’ of this Energy.

I have written all this only to offer in some way the proof of the fact that U.G. is the Enlightened one. Besides personally experiencing the miracles of the extraordinary Energy he possesses, the only other proof of his Enlightenment is his behavior in day-to-day life. Since I cannot offer the experience of his Energy to anybody, all I can offer as proof is the description and example of his perfect behavior.