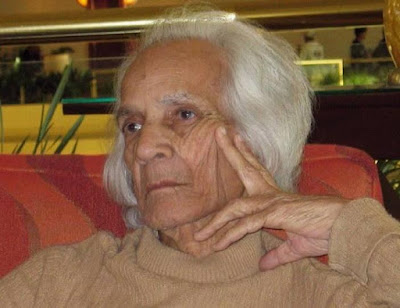 A Mirror Reflecting
This Is It, The Nature of Oneness
Dr. Jan Kersschot

J.K.: It is sometimes said that one of the characteristics of your teaching—if I can use that word—is that you don't claim anything for yourself. Is that correct?

U.G.: It is correct. But 'teaching' is not the right word. Teaching is something you use when you want to bring about a change. And I don't see the need to change anything.

J.K.: That is why 'teaching' is not the right word.

U.G.: I am asserting all the time, time and again, that there is nothing there to be changed. So how can you use whatever I am saying to bring about a change?

U.G.: I am not interested in freeing anybody from anything. That is my approach. Right from the beginning, it is false to suggest one can save anybody.

U.G.: It is the demand of being unselfish which is creating selfishness.

U.G.: I am not in conflict with this society because it cannot be any different from how it is. I don't have any value system, and I don't want to fit into any system. As long as people have a war inside, there will be war outside.

J.K.: What is it that makes you go and talk around the world?

U.G.: There is of course consciousness here [pointing at his body]. I am aware of what is happening around me, and aware of what is going on in my body. Actually, there is no inside and outside. That division is only a thought.

U.G.: It is not that I am mystifying my words, or putting it in a framework of mysticism. What I am saying is so mechanical. It is here [pointing at his body] in this computer, in the data bank or whatever it is called. So, you press some buttons on my computer, and the computer comes out with the answer. There is nothing here [pointing at his body].

U.G.: There is no activity here. And I am not mystifying it, I am just putting it in physiological terms. The brain is a very idiotic thing; it is just a container and a reactor. I am saying so many things. This [pointing at his body] produces so many words. But it does not know what it means. As I told you, you are the one who is operating the computer. And when you are asking a question, I am not even listening to the question. There is no listener listening and translating. Both questions and answers are but noise.

J.K.: All these interviews are completely useless.

J.K.: There is no need to say you are sorry.

U.G.: I know, you are right. Saying I am sorry is just an old habit. Oxford and Cambridge. Education. The Victorian influence.

U.G.: In fact, I never felt really sorry in my entire life. 'Take it or leave it.' Anyway, in this shit-box I don't find any thoughts. There is no such thing as thought. Do we know what thought is? What is thought? I am not asking myself any questions, others are asking.

J.K.: All you are saying has no personal involvement.

U.G.: Yes. And I am not saying that out of humility. All that I am saying, all the radio interviews, all that has been published in my books, I don't know what I am saying. I am no more than a mirror reflecting.

J.K.: You have no choice: the words just come out.

U.G.: Actually, we don't have any freedom of action because all our action is a reaction.

U.G.: To me, every event is an independent event. It is only afterwards that people look at a series of events and make a story of it. And give it some kind of meaning or importance. If you are trying to change things, it puts you on a merry-go-round; it never stops.

U.G.: I don't believe anything anymore. All the spiritual belief systems... That is not my way of functioning. And I did everything. Everything. I stayed in a cave for seven years. From the age of fourteen to twenty-one. I studied all the books. Every book, every spiritual practice.

U.G.: Because I wanted to be sure that they were all false [laughter]. When I was seventeen and sitting in that cave, I still had a natural drive. I found out that something was wrong. Why? Why should I deny myself? Why condemn sex? Then I arrived at a point where it was not necessary for me to deny sex. I was twenty-one and in the Theosophical Society and there were girls from all over the world. They were all stuck there because of the war. I was then considered to be a handsome guy. But I didn't go to the other extreme. My question was not about going into sex. I wanted to know why sex was condemned in spiritual life.

U.G.: If 'desire' is a hormone, then the whole story about ethics and religious rules is a failure.

U.G.: Once I was giving a lecture in India, in the Theosophical Society. There happened to be a Catholic priest sitting there. He got up and asked me a question about celibacy. And I told him, 'If for any reason you want to be free from sex, you have got to be free from God. I don't know why you are into this celibacy. Get God out of your system and sex will automatically follow. Both of them spring from the same source. Why insist that God is so important? Don't be so serious! Everything is divine.'

J.K.: So many misunderstandings and interpretations are around.

J.K.: There are for example a lot of misunderstandings regarding karma and reincarnation.

U.G.: I remember I was only seven years old when we were attending the Golden Jubilee of the Theosophical Society. And there were 3,000 delegates from all over the world. And the first time you meet, people introduce themselves and say, 'I was Queen Victoria in my past life, what were you?' or 'I was Alexander the Great in my previous life' and I found out that there was no historical figure left for me. No spiritual teacher was left for me. What was I in my previous life? Who am I? What was I in my past life? Finished. So from that day on I left all my belief in karma and reincarnation. India was of course the foundation of all this. They always translate those terms like 'karma and reincarnation' in completely the wrong way. There are so many terms translated and copied without knowing what they mean.

U.G.: Maya, they say, means illusion. Maya is not illusion. The word maya means to measure. So, whenever you are measuring, there must be a point 'here' [pointing at his eyes]. So there is a relation from this point to the things you measure.

U.G.: It is the measuring from this point which creates the illusion. When someone comes with a gun to shoot you, you don't call that an illusion?

U.G.: The way they tried to translate things is so funny. There is no such thing as 'karma' in the usual sense. It is all just response to a stimulus. But response and stimulus cannot be separated. It is one unitary movement.

J.K.: The law of action and reaction.

U.G.: Yes! Action and reaction. Nowadays scientists are also saying that the brain is a reactor, that it cannot create anything. The brain doesn't play a major part in this body, it is just a reactor. Physiologists today are now finding out that it is indeed not how it has been described all those years. In the light of their experiments they realized that the brain just plays a minor part in the body.

U.G.: All nonsense. Right? It is the human mind. The human mind that makes up everything.

U.G.: This morning, I was saying that all the animals are in the highest spiritual state all the sages are talking about.

U.G.: No need for spiritual teachings. Don't listen to the holy men. You take it for granted that they are all wise men, that they are spiritually superior to us all, and that they know what they are talking about. Let me tell you: they don't know a damn thing! There are so many saints in the market place, selling all kind of goods. For whatever reason they are doing it, it is not our concern, but they are doing it. They say it is for the welfare of mankind and that they do it out of compassion for mankind and all that kind of thing. All that is bullshit anyway. All the saints or gurus: they don't do themselves what they are saying their followers should do. They say, 'Do as I say,' but they are not doing it themselves.

J.K.: Buddha was not a Buddhist.

U.G.: Some people come to see me because they believe I have something that they don't. They want to be at peace with themselves, but all that they are doing to find peace is what is destroying the peace that is already there. All their seeking has led them nowhere. It has all been useless. The living organism is not interested in all the spiritual techniques. When once they have a spiritual experience there will be demand for more and more of the same, and ultimately they willl want to be in that state permanently. Talking about bliss, eternal bliss, unconditional love—all of that is romantic poetry. The search is endless.

U.G.: The intention in studying the lives or the biographies of some of those people whom you think were enlightened is to find a clue as to how it happened to them, so you can use whatever technique they used and make the same thing happen to you. That is what you want. And those people give you some spiritual techniques, some methods which don't work at all. They create the hope that someday it will happen to you. But it will never happen. There is one thing that I am emphasizing all the time: it is not because of what you do or what you don't that this kind of thing happens. And why it happens to one individual and not another—there is no answer to that question. I assure you that it is not the man who has prepared himself, or purified himself to be ready to receive that kind of thing. It is the other way around. It hits. But it hits at random. It has no cause. All this seriousness about the spiritual goal... Let me tell you that all that wanting leads seekers nowhere. And I have nothing to give.